The White Elephant Archive, Setting No. 3

Performance will be followed up by discussion with theater theoretician Ján Šimko.

My grandparents’ silence about the Shoah was not a means of denial but a way of dealing with their trauma. However, it was an ambivalent silence. They wanted us to “look forward instead of backward,” but they also wanted us to know. In 1979, my grandmother began creating a family archive. Once I had received its materials the archive became a personal obsession for me that has been both haunting and challenging, both a treasure and a burden. Over the years I have vacillated between feeling a magnetic attraction and a self-protective repulsion to the archive. I have conceived dozens of art projects dealing with the material, but eventually I dropped all of them. But the archive never let go of me and at some point I arrived at the understanding that I had to face up to it and deal with it artistically.

The White Elephant Archive, Setting No. 3 explores the legacy of the Shoah from the perspective of the third generation living in Austria today. In this intensely personal, one-man production, Freudmann uses his family’s archive—which includes poems written by his grandfather while imprisoned in concentration camps—to explore his family’s silence about the Shoah, and his own attempt to understand the burden of this legacy through art. Reflecting on the politics of Shoah commemoration in Austria, and larger questions about how to speak of a horror once its witnesses are gone or fall silent, this production provides a rare and important glimpse into the experience of the third generation living in Europe, and the impact of trauma across generations.

Eduard Freudmann lives and works in Vienna. He teaches Transdisciplinary Art at the Academy of Fine Arts Vienna. As an artist, he develops projects with a focus on performativity and public space. His approach is characterized by transdisciplinary work, artistic research and critical discourse. He always strives to relate contemporary aesthetics to political analysis, and above all, to encourage critical thinking among the public. In his most recent project, "Monument to a Myth", Freudmann temporarily transformed the Liberation Monument in Graz into a pink obelisk, aiming to shift the confusing narratives around the commemoration of the departure of Allied occupation forces in 1955.


Erste Foundation is main partner of tranzit.
The White Elephant Archive performance in Bratislava has been supported by the Austrian Cultural Forum Bratislava.
The event has also been supported using public funding by the Slovak Arts Council 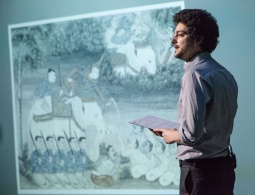