Oleksandr Burlaka’s lecture will focus on his ongoing research project on glazed balconies in the former Soviet Union and Ukraine. This “vernacular” balcony layer has become a typical and highly visible skin of the post-soviet city. However, it has remained almost invisible to citizens and urban researchers. While investigating the rise of the glazed balcony, we will provide a timeline of the socio-political changes through the diy architectural element which lies at the crossroads of personal, common, unique and mass-produced misery and chic.
Delving deeper into the larger urban scale, Burlaka will present the ongoing case of the famous UFO building in Kyiv, an important representative of postwar heroic modernism which now finds itself among fallen state institutions and facing the onslaught of commercial development. This 88-year old architect, artist, and author of the building Florian Youriev, together with developers, investor, bureaucrats, activists and architects of all kinds are the main protagonists of this typical drama of our time.
Urban clashes and participation in the historical architectural context of Ukraine are also the main reference for Burlaka's artistic projects from the Melnychuk-Burlaka group practice. They include installation, modelling, film, guided tours and photography, some of which will be addressed in the lecture.

WHICH MODERNISM?
Legacies of modernisms in post-socialist cities

To participate, please register at mobility.workshop@gmail.com by April 24!


Workshop for students of architecture and related fields but also for anyone interested in city planning and development, the recent history and evolution of the perception of the city´s historical layers and their transformation, decline or preservation in the making of post-socialist cities.

In 2018, postwar modernist architecture often has a 50-year requirement for appearing on the heritage list. But which modernisms are they? Are they international, socialist or local modernisms? How common are their problems? Looking at Bratislava's modernist layer from the Ukrainian perspective of the #savekyivmodernism movement of activist Oleksandr Burlaka, we will try to define its political side and its influence today. The discussion will take place during a 2 to 3 hour bike tour in Bratislava where we will experience the interaction of contexts, while linking examples from Ukraine, Georgia and Armenia to local cases.

Note: To participate on workshop, please don´t forget to bring your bike!


Oleksandr Burlaka is a Kyiv-based artist and architect working in installation, photography and exhibitional display. Burlaka’s work includes research, fine art, collaborative practice and often considers architecture and its transformation in post-Soviet countries.
Oleksandr Burlaka was the member of Melnychuk-Burlaka group (2007-2011), Grupa Predmetiv (2011-2016) and the co-founder and the member of Hudrada (Creative Committee in Ukrainian) curatorial and activist interdisciplinary group and Architectural bureau ARDOC, Kyiv (2004-2011). Working on an architectural research has been contributing to The Book of Kyiv (Kyiv Biennial 2015 book), Kiew Architekturführer by DOM Publishers, Soviet Modernism 1955-1991: Unknown History published by Architekturzentrum Wien, where was responsible for research and collecting materials in Ukraine, as well as for Trespassing Modernities (Istanbul) and A Parallel Modernity. Soviet Architecture 1956-1991 (San Paolo) exhibitions. During 2016-2017 is participating in the group of the Traveling Academy. The Empire Strikes Back? exploring the post-Soviet cityscape in Chisinău, Kiev, Minsk, Moscow, Tbilisi and Yerevan. 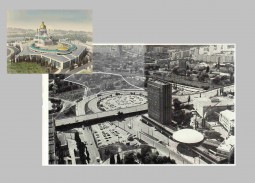