Jonas Staal : The Architecture of Revolution

A collaboration project between tranzit.sk and Faculty of Architecture STU Bratislava.

Over the past ten years, artist Jonas Staal has been interested in the relation between art, democracy and propaganda. He has organized exhibitions with artworks from the private collections of political parties in the Netherlands; developed an analysis of a prison design by the Dutch ultranationalist MP Fleur Agema; and a free smartphone application providing an ideological analysis of every pavilion in the 2013 Venice Biennial. As such, Staal has attempted to make visible the political and ideological investments that are made into contemporary art and architecture. Propaganda, the artist claims, is not contradictory to modern capitalist-democracy: art continues to serve, in many different ways, the dominant interests of power.

In line with this analysis, the artist has also attempted to initiate, through the space of art, new platforms for emancipatory politics. He has created international assemblies for artists and politicians, and developed alternative platforms for stateless and liberation movements from all over the world. By engaging directly with social movements, progressive political parties and resistance movements, Staal attempts to engage the imagination of art in furthering political crises and struggles. He regards these projects as a form of counter or “emancipatory propaganda.”

In his lecture The Architecture of Revolution, Staal will discuss some of his key works from the past ten years. Within the term architecture he refers to both the “ideological architecture” underlying art production, and also the practice of architecture, which has become more and more prominent in his work. This has been illustrated most lately in the form of a new public parliament he was commissioned to develop for the autonomous Democratic Self-Administration of Rojava, a new non-state entity in the northern part of Syria, declared independent in 2012.

Staal lives and works in Rotterdam. 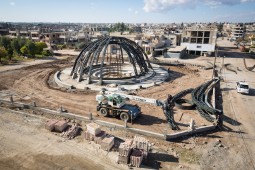