Followed by a guided tour of the exhibition by curators Maja and Reuben Fowkes at 5 pm.

“The trees in the city are like passive warriors. And witnesses. Every generation of Bratislava citizens shapes the city in its way. The city grows - wider, higher, while trees remain in the same place during all these changes. Although some disappeared due to these changes. The idea for this walk comes from two works of art and action. The first one was Akcia Paulovnia, a small event organized in 2013 as a reaction to the plans to demolish the building of Hotel Kyjev and former Prior (for the purpose of a larger shopping centre and offices). There was a high chance that Kammenné square in front of the building would disappear too. Together with beautiful, large Paulovnia tree. We organized a group of artists and amateurs to sit around the tree at a specific hour and to draw/paint it. It was a simple gesture - to document something magical in the middle of a concrete square - and to draw the attention of passersby. I continued with a similar idea in Seoul, Korea, where I decided to walk through the city and create series of plein air paintings of trees that caught my eye. I believe that trees are the element of the city that can awake us during walking, during daily activities and move us to the observation mode.

This walk will be oriented towards some of the protected trees in Bratislava (they are scattered all around the city and to see all of them would require an all day long activity). However, there are only 29 protected trees (some of them are in bad shape and dying) in Bratislava and there are many more possible candidates. So the walk is destined also to look for possible new ones, for walking with awareness and searching for hidden beauty in the mundane.” (Oto Hudec) 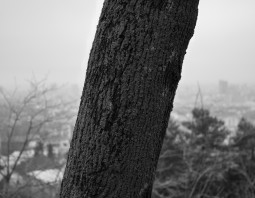