Dead Weights and other Pressures

A collaboration project between tranzit.sk and Studio IN (Department of Intermedia and Multimedia, Academy of Fine Arts and Design, Bratislava) in the context of the Open Studio program

Ciprian Mureşan* is one of the best-known and prolific young Romanian artists. He belongs to a generation that came of age after the 1989 Revolution, in the years of so-called “endless transition” towards an ever-unattainable ideal blend of democracy, market economy and Western standards and values. Since this image finally turned out to be an ideological construct masking the rapid flow of rampant capitalism and readjustment of power structures, it is no wonder that a certain mistrust of history paralleled with the omnipresence of the critical gaze are so characteristic of Mureşan’s artistic approach.
In his pieces he explores and re-contextualizes historical, social and cultural (literary and /or artistic) references, in order to disrupt established representations and canons, to unmask their assimilation into the everyday and the power relations lying behind them.
His essentially demystifying practice combines sharp irony with light humour, and artistic craftsmanship with conceptual and performative scenarios that result in constant negations of the fetish-like character of the work of art.

Ciprian Mureşan (b.1977) lives and works in Cluj, Romania. He works with a variety of media, from drawing, video and objects to photography and books. Since 2005 Mureşan has been editor of IDEA art + society magazine. He has exhibited in important galleries and institutions throughout the world, such as the New Museum in New York, Neuer Berliner Kunstverein in Berlin and Tate Modern in London. His work has also been presented at major contemporary art shows, such as the biennials in Athens, Venice, Sydney and Moscow. Mureşan exhibited in Slovakia at the Monument to Transformation group exhibition in tranzit.sk in 2008 and in amt_project gallery in 2011. 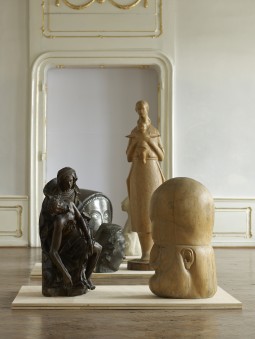