Monika Mitášová and Marian Zervan:
Architecture Variables in the Age of Fluidity
Hosted by:
Peter Michalovič

If you are interested in participating in one of the lectures with English translation, please, contact us at the following email address:
juliana@julianamrvova.com
Lectures will be delivered in Slovak and Czech.

Josef Rauvolf (1953) - after graduating from the Faculty of Arts of Charles University in 1980 he worked as a janitor, participated in the activities of the Jazz Section and translated for
samizdat. After 1989 he worked as a freelance journalist, contributed to Mladá Fronta, Lidové Noviny, Respekt, Hospodářské noviny, Reflex etc., published translations (especially of W. Burroughs, J. Kerouac, W. Gibson, H. Selby, A. Ginsberg and others), in 2012 he was awarded the Josef Jungman price for the best translation of the year. He participated in making of the Alternative Culture series for the Czech Television (FITES prize in 1998) and other documentaries, he has been cooperating with the radio and giving lectures on the Beat Generation. He lives in Prague.

Tomáš Glanc (1969) studied Russian language and Bohemistics at the Faculty of Arts of Charles University and completed a doctoral programme Graduiertenkolleg at Universität Konstanz. He graduated with a dissertation on visuality of the Russian avant-garde (Видение русских авангардов, published in 1999). His further monographs deal with development of the avant-garde aesthetics in literature and visual arts (Lexicon of Russian avant-gardes, 2005) and the contemporary cultural context in Russia (Russia Archipelago, 2012). He has prepared for publication, commented and translated the works of Yuri Lotman and the Tartu school, Kazimir Malevich, Roman Jakobson, Renate Lachman and others. He worked as the director of the Institute of Slavic and East European Studies at the Faculty of Arts of Charles University in Prague, director of the Czech Center in Moscow, researcher at the University of Bremen and he is currently a visiting professor at the Humboldt University in Berlin.

Marian Zervan (1952) is a theorist of architecture and fine arts. In the years 1993 to 2003, he led the Department of Architecture, Art and Design, at the Faculty of Architecture, STU, Bratislava. From 2003 onwards he has been a professor at the Academy of Fine Arts. Since 2006 he has been giving lectures at the Department of Art History, Faculty of Arts in Trnava, which he has led since 2010. In 2001 he co-curated the Czech and Slovak exposition at the 7th International Architecture Exhibition in Venice. He has also co-curated many exhibitions in the Slovak National Gallery. He specializes in sacred and secular iconography and theory and methodology of architecture and art in the 20th century. His most important texts and publications include: Tales of the New Testament. Iconography from 2001 and Tales of the Old Testament, Iconography from 2006, Changing Spatial Theory of Architecture of the Second Half of the 20th Century from 2000, and the text: Question "What is architecture and three answers to it” from 2004. Plus a number of studies devoted to critical theory of the architect Peter Eisenman. Together with Ing. Arch. Monika Mitášová, PhD. they co-organized the seminar and workshop ARCHfest'96 and they are co-authors and editors of the theoretical issues of Projekt magazine on Writing in Architecture and Diagrams in Architecture.

Monika Mitášová (1968) specializes in contemporary theory of architecture. She taught at the Faculty of Architecture STU in Bratislava (1993-2002), FA TUL in Liberec (1998-2002) School of Architecture and Design in Prague (2002-2009). She currently teaches criticism and theory of architecture and history of the 20th century architecture at the Department of Art History, Faculty of Arts, Trnava. As the curator of the collection of 20th century architecture (2005-2012) she participated in art exhibitions Spaces in the Gray Zone in Slovak National Gallery and Projects for tranzit. Together with tranzit, Faculty of Architecture STU and TU Vienna (2010), Vladimir Dědeček. Together with Marian Zervan and Benjamín Brádňanský Studio at the Academy of Fine Arts (2009), the Eighties. Postmodernity in Slovak art 1985 - 1992. Section dedicated to architecture (2009), SIDEWAYS. Together with Alexandra Kusá and zerozero studio untd. Exhibition for the Czech and Slovak pavilion at the 11th Biennale of Architecture in Venice (2008), Form follows…risk Together with Jana a Jiří Ševčík, Futura and Karlin Studios, Prague (May-July 2007) and SNG Bratislava (August-September 2007), (Non)Permanent exhibition. Section on architecture (2006). Her writings have been published in magazines Stavba, Era 21, Zlatý řez, Architekt and Projekt. She is editor of anthology Oxymorone and pleonasm. Texts of critical and projective theory, Zlatý Řez, Prague 2011. 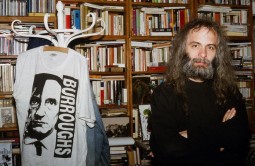