The opening will be preceded by the performance:
Non-aligned relatives by Ana Hoffner
at 6:30pm


FREE SHUTTLE BUS TO THE OPENING:

Admission free. Don’t forget to bring your passport or ID card for the trip!

20.12. 2018, tranzit.sk
The Story of Gay And the Story of Lesbian
reading from dramatic texts
Organized by NOMANTINELS Theater

The project has been also supported by the Grant Scheme of Bratislava Self-Governing Region and by the Austrian Cultural Forum.

Queer Stories – this international group exhibition addresses queer identity as a still under-represented social category, often associated with stereotypical thinking and social exclusion. It is the first exhibition dedicated to this topic at tranzit.sk and features an international selection of artists whose practices deal with queer histories / herstories / stories. The organisers also wish to strengthen the exchange between Vienna’s lively queer art scene and Bratislava’s queer community.

The notion “queer” as a term used for lesbian, gay, bisexual, trans- and inter-gender activism and academic thought has an almost thirty year long history. Its roots date back to the late 1980s, originating on the one hand in the then-new rhetoric of fighting homophobia (and transphobia) and, on the second hand, in the then-new way of thinking the category of gender. Simultaneously with activism and theory, queer art practices started to emerge in the early 1990s, translating a new powerful activism and epistemology into aesthetic categories, and building new forms of artistic expression concerning gender and sex.

Queer goes beyond LGBTIQ+ identities; it challenges and questions personal or assigned identities. And in so doing it challenges power relations and addresses post-colonial questions, and discriminatory and (pornographic) sexual politics. The new activist forces together with the radical thinking of gender and sex proved to be fertile ground for artistic production. For example, an entire new cinematic practice, the “New Queer Cinema”, hit screens all over the world, narrating stories of non-hetero-normative existence. Besides film, fine art also saw a huge number of queer art practices emerge during the 1990s (and before and after). Queerness became a decisive point of departure in contemporary art and culture production implicating the necessity of societal change.

The exhibition brings together works that deal with subjects and subjectivities that have evolved within the queer context. They do not focus on the coming-out scenario as the problem that kicks-off the narrative, but rather use queer subjectivity as a canvas to unfold lives and worlds which are intended to make sense for those in the know – not for those who need explanations. They do not go into the suffering of trying and coming out of the closet, but lead an existence outside the closet – not questioning their lives or being at pain with it. Queer Stories wants to show how artistic expressions come up with frameworks in which queer lives matter; at times they are full of jokes and innuendo (Robert Gabris) and at other times, radical associations (Toni Schmale); they sometimes thrive on quoting and subverting the everyday (Ivan Jurica); they are deeply situated in a history of drag (Pauline Boudry / Renate Lorenz), queer art practice and theory (Ana Hoffner), or in artistic research (Cabello/Carceller); they tell stories of sexual desire and the political notion of the body (Anna Daučíková). They all share a sense of telling their tales differently in the sense that these works deal with the way stories are told and show how to establish a radical way of construing new narratives. This is important and crucial, as new ways of thinking about gender need new ways of telling the stories that focus on the people who live in newly gendered contexts. The endeavour of this exhibition is to show work around a specific dimension of queer art practice (“telling stories”).

By bringing together artists of different generations and diverse artistic genres (drawing, film and video, installation, performance, sculpture) Queer Stories intends to stimulate thought – and give pleasure. Because without wit and irony, no story can be queered and no (queer) story can be told.


Accompanying Programme:
A queer experimental film night with films by Katrina Daschner, Ana Hoffner, Ashley Hans Scheirl, Sabine Schwaighofer, Nana Swiczinsky followed by a round table with the film makers and input by Andrea B. Braidt, as well as lectures by Helena Cabello, Ana Carceller, Marty Huber will accompany the exhibition. The programme also includes the screening of video works by Pavlína Fichta Čierna with guests; the discussion on homophobia with Eszter Kováts, Zuzana Maďarová, Veronika Valkovičová and reading of dramatic texts, both organized by NOMANTINELS Theater within the Month of Human Rights. 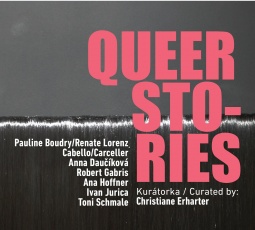 Related
Cabello/Carceller: The State of the Art – Some possibilities for a queer riot from the surrealistic South
Marty Huber: Gay Pride! Gay Shame! Queer Feelings... Back to the B_Orderlands
Post-Eclipse Transfocation
Queer Experimental Film Night