The exhibition consists of a projection of two video essays, MUEDA 1979 and Effects of Wording, and a book created specially for the exhibition in tranzit.sk, in collaboration with the publishing house APART Label. Film images, archival documents and personal testimonies are brought together in the book.

Catarina Simão uses the method of archaeology of the film image in her video MUEDA 1979. She concentrates on the rhetorical effect of film language. An important problem here is the affectivity of memory: the gestures and language of remembrance. MUEDA 1979 is a detailed reading of a sequence in the Mozambique film Mueda, Memória e Massacre (Ruy Guerra, 1979). Ruy Guerra shot his film in collaboration with non-professional actors, with the clear documentary objective of capturing a theatrical form of collective remembrance of the massacre that took place on June 16, 1960. The extract shows a recording of a popular play in the province of Mueda in northern Mozambique. This episode is regarded as the event which roused the people of Mozambique to armed revolt against Portuguese colonialism.
Catarina Simão works with film language in such a way as to uncover the layers that the film itself does not speak of. Exactly as in the original film, the elements appear from a direct reading of “reality”. Accordingly Simão poses the following problems: the story and the trustworthiness of its rendering; the dramatic effect of closeness; translation and editing as a relevant mode of intervention. By use of repetition and abruptly stopping the running film, attention is focused on a few moments when soldiers are pulling the headscarf from the head of Modesta.

The second video, entitled Effects of Wording, documents the circumstances of origin and the daily life of an educational project called The Mozambique Institute. The story is based on the author’s composition of images recording an extensive collection of correspondence, newspaper cuttings, photos, textbooks, film shots, and other archive materials from a number of sources. The rhythmicisation of sound tracks and their repetition reinforces the emotive reading of the story. Also used in the video is the testimony of a former student and teacher in the institute. The selection of documents used, and their presentation, cutting, and processing, is related to a complex ideological struggle. The educational institute ultimately existed in the shadow of the Mozambique Liberation Front (FRELIMO), and the armed struggle for the liberation of the country was infiltrated into the effort to create better conditions for study. As its very name indicates, the video is focused on the operational function of language, on pronunciation and translation. It signals that language and the teaching process may lead not only to the appropriation of national or cultural identity but also to the adoption of certain models of action, in this case to the strategic advancement of national unification and the fight for liberation from colonial rule.
Archival documents, as rendered by Catarina Simão, behave as performative elements. The conceptual framework of the book is based on the framing of film images by new layers of their reading. Images and texts document the search for the original, uncensored version of the film Mueda, Memória e Massacre (Ruy Guerra, 1979). They play out before the viewers/readers the mystery of the cultural production of images and their ideological control. Both the exhibition and the book have the one-word title “Uhuru”, which translated from Swahili means “Freedom”. Geographic and temporal distance from Central Europe is, here and now, only relative. The exhibition leads us to the effects of ideology in film language and to reflections on the role of cinematography in modern liberation processes (and not only in Africa).

Catarina Simão (b. 1972) is an Lisbon-based artist whose practice is built upon long term research projects that entail collaborative partnerships and different forms of presentation to the public, such as art installations, screenings, participatory workshops and talks. Simão is known for her essay-like displays, using documentation, writing, films and videos related to Mozambique films and images made during the struggle against Portuguese colonial occupation and after independence. Her work has been presented at Serralves Museum, Manifesta 8 Biennial, Africa.cont, Reina Sofia Museum and other art institutions across Europe and also in Mozambique, USA and Lebanon. The Mozambique Institute Project is her latest project involving cinema-action and pedagogy. “Uhuru” will be her first solo show. 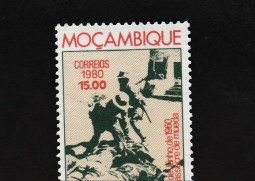