Deleting others’ texts is not the smoothest way of entering a discourse; however, acts of removal/erasure/demolition are not without precedent in art history, let alone the history of social and political movements. By deleting essential parts of texts written by modernist architects such as Lina Bo Bardi, Le Corbusier, Roberto Burle Marx, Nikolai Ladovsky, Štefan Svetko, Ivan Matušík, Vladimír Dedeček and others, Mona Vătămanu and Florin Tudor point to the still common perception of modernism as a failed project. At the same time, their gesture is an affirmative one. Viewing the photographs of the fragmented writings, one feels the urge to imagine, construct something meaningful in place of the ruptures, and the question of “what?” puts the viewer in a liberated, albeit highly responsible position.

Often referred to as “historiographers of the present”, Mona Vătămanu and Florin Tudor belong to the last generation of Romanians who has first-hand memories of communism, came of age around 1989 and witnessed the general disillusion brought about by the unfulfilled expectations of the system change. Trying to understand the mechanisms of social and historical processes, the ways memory, remembering and projection inform individual and collective identity, the artists select highly symbolic motives, capable of connecting various times and places. They frequently turn to modernist architecture, viewed not only as a repository of memory, but also as a field permeated by social ideals and ideologies, an indicator of people’s way of living and understanding the present. Their metaphoric, poetical artistic practice constantly moves between realistic evaluation of the object of inquiry and the shaping of images of hope.

One of the main reference points of this exhibition is mass housing, viewed as a controversial phenomenon. After the Second World War, mass housing responded to the acute lack of dwellings and to the need to raise people’s living standards; it combined the once utopian ideals of the architectural avant-garde with the enthusiasm of a new beginning. At the same time, the overreaching control of the state, the ideological dominance of political power, followed by economic decline cleared the project of its substance, with criticism of modernist architecture and public housing being equated with criticism of the communist system. Nonetheless, as the artists remind us, one-dimensional judgments which do not distinguish between the ideals of a better society and the social systems built upon these ideas are as erroneous as viewing modernist architecture as a complete failure, instead of evaluating its particular achievements, especially in the realm of complex urban planning.

While the film August (2004 – 2007) refers to the effects of historical processes on the mentality and lives of the generation who carried out industrialisation, the first tenants of socialist housing estates, The Rain (2005) deliberately takes on the subjectivity of the authors. In quoting Marcel Broodthaers’s La Pluie (1969), the film plays tribute to the place Florin Tudor grew up in Bucharest, the stubborn act of trying to render visible the image of the once lived-in block of flats being equal with that of trying to recuperate personal memory and its collective underpinnings.

Further on, the exhibition confronts us with two different accounts of the present. In the film Wreck of the Earth (2014), the distressing remnants of an industrial complex symbolize a post-historical landscape. It is only the radical gesture of throwing bread instead of seeds, which may aspire to healing effects, that is, an inverse ritual, which violates norms, which in their turn, have already been fully surpassed. On the contrary, the exhibited banner points to the positive experience generated by Jurigovo námestie/square in Karlova Ves in Bratislava, which the artists visited last year. This “complete residential unit”, in which spatial organisation, the design of apartment blocks and the provision of public facilities were part of an all-encompassing urban plan, stands in sharp contrast with today’s trends, where financial interests overshadow aesthetic and social needs.

Sewed on a banner, the quasi abstract, avant-garde type image of Jurigovo námestie is ready for take-off, to start its journey as a flying utopia. In its vicinity, The Sun and its Double (2014), a film formally related to experimental cinema, proposes a new cosmogony: what if there are two instead of one sun, if a non-hieratical, relational and fully dialogic order replaces the actual structure of the world?

Rosa Luxemburg’s memorial evoked at the beginning of the exhibition and the “flying” banner are both symbols of hope: they question the utopian potential that lies in post-socialist societies, the capacity for imagining a new social order and its institutions, something that - in the context of today’s declining world-system -, appears as an utmost necessity.

Mona Vătămanu (born in 1968 in Romania) and Florin Tudor (born in 1974 in Switzerland) have been working together since 2000. They are based in Bucharest.
Recent exhibitions: I do not know the real story which happens there, Argos Centre for Arts and Media, Brussels (2014), 46°19′41″N 23°12′44″E Geamana, Andreas Huber Gallery, Vienna (2014), A History, Centre Pompidou, Paris (2014), Something in Space Escapes Our Attempts at Surveying, Württembergischer Kunstverein Stuttgart (2014), Report on the Construction of a Spaceship Module, New Museum, New York (2014), All that is Solid Melts into air, Extracity, Antwerp (2013), I dreamt the work of another artist, Kunsthalle Lissbon (2013), The order of things, DAAD Galerie, Berlin (2012), Over the Counter, Műcsarnok Kunsthalle, Budapest (2010), All Power to the Imagination!, Secession, Grafischess Kabinett, Vienna (2009), Surplus Value, BAK, basis voor actuele kunst, Utrecht (2009). They participated at the Shanghai Biennale in 2014, the Venice Biennial in 2009 and 2007, Istanbul Biennial in 2011, Ural Biennial in 2010 and Berlin Biennial in 2008.
Monographs on the artists have been published by BAK, basis voor actuele kunst, Utrecht & post editions, Rotterdam (2009), Secession (2009) and Revolver Publishing by VVV (2009). 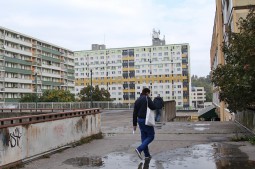